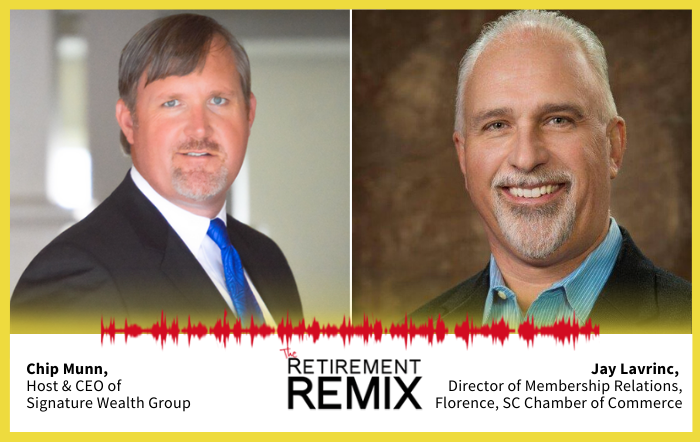 Join Chip Munn, CEO of Signature Wealth Group and Senior Wealth Advisor with RJFS, who is joined on this episode of The Retirement Remix Podcast by Jay Lavrinc, Director of Membership Relations at the Greater Florence Chamber of Commerce in Florence, South Carolina.

Jay has had a long, varied career in the electrical services industry. From humble beginnings as a field service engineer, working his way up through management and supervision to most recently serving as the Senior Vice President for Medium Voltage Service in the US, Canada, and Mexico with ABB, Jay has done it all.

Once recognizing that he was approaching retirement age, Jay took an intentional step back to evaluate how he wanted his retirement to look and feel. Even without a clear picture of what he did want, he knew what he didn’t; and that was the continued hustle and bustle travel that he had come to know in the latter portion of his professional career.

Jay decided that living in Pittsburg, Pennsylvania, though he had been there for many years and it was the home of both his children and grandchildren, wasn’t necessarily where he wanted to be long term. His ideal retirement didn’t include shoveling snow in chilled winters. It was a tough decision, but he has found great love in his return to Florence, which has grown and developed drastically since he moved away those many years ago.

Jay began his retirement journey by taking a light retirement while he evaluated his options. He was ‘cutting grass and playing golf,’ yet open to opportunities that may arise to re-engage him in the workforce, knowing he just wanted something new and different from his previous career. When Jay learned of the opportunity with the Chamber, he spoke to his potential superior, and they worked together to determine if this would be a good fit for him.

Together, they decided there that there was the opportunity for flexibility and reduced and stress and pressure that could be best for Jay in that position. He got to choose how much he wanted to ‘work,’ choosing to reduce that down to 25-30 hours per week, while still feeling engaged and doing something that he enjoys, that keeps him close to home and benefits his community.

Tune in to episode seven of The Retirement Remix to hear more of Jay’s journey and listen as Chip and Jay discuss topics such as: 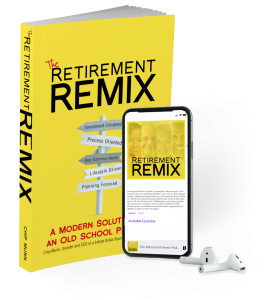 *Any opinions are those of Jay Lavrinc and Chip Munn and not necessarily those of Raymond James. This information has been obtained from sources considered to be reliable, but we do not guarantee that the foregoing material is accurate or complete.