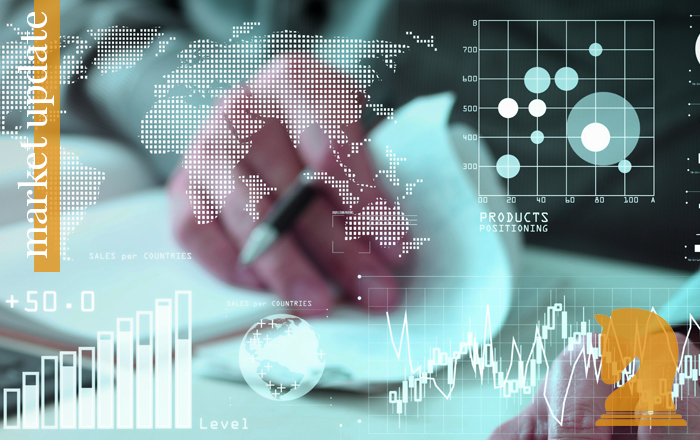 The first quarter has wrapped up, with the S&P 500 finishing higher by nearly 6%, making it the fourth consecutive quarter of positive returns for the index. The underlying stocks remain very strong with almost all of S&P 500 stocks above their 200-day moving average, indicating a general uptrend for most stocks.  Underneath this strength is a rotation that has seen outsized gains coming from areas most tied to an economic reopening, while last year’s technology-oriented leaders largely have underperformed in 2021.
This bodes well for the next few months, as strength in stocks tends to precede more strength, especially when such a majority of the market is participating. I remain positive on stocks, especially those which could benefit from economic reopening. Of course, I would not be surprised for the unusually strong gains experienced over the past twelve months to become more normal (including normal pullbacks) over the next year.  I suggest using such weakness as buying opportunities, as most of the economic data I see has indicated strength, if not excellence, in many areas of the economy.
While market momentum has been supported by fiscal stimulus from our government and by continued Fed support in the form of easy monetary policy, it has been accelerated by a ramped-up vaccine rollout and the expectation of infrastructure spending.  At some point, we’ll have to balance those with the concerns over how to pay for it all.   President Biden released phase one of his infrastructure plan recently, which reflected about $2 trillion in infrastructure spending paid for by about $2 trillion in new corporate taxes.
Much of the bill is aimed at increasing productivity, which is positive for longer-term growth prospects. Infrastructure spending can be seen as an investment, with the “returns” coming in the form of greater productivity.  The economic impact should be somewhat modest, however, as the proposal is set to be spent over the next ten years.
Looking at earnings per share (EPS) estimates, we think technology, healthcare and consumer discretionary look to be hit the hardest if taxes are raised to pay for the spending.  However, a compromised corporate tax increase would make the EPS fallout a bit more palatable. The corporate tax hike impact could be softer than many believe, as much of the savings from the Trump tax cuts seemed to have gone toward stock buybacks. That could make stock buybacks may slow down, which could cause a slowdown in stock market gains but may not affect corporate balance sheets as much.
Phase two is likely to be released later in April with more spending paid for by personal taxes. These proposals are a starting point for Congressional discussions and are likely to take months to iron out, but something significant is likely to get done this year. Generally, I do not believe the potential for higher taxes outweighs the massive stimulus supporting the economic reopening and recovery ahead.  In fact, we’re seeing some earnings estimates get ramped up, despite the bite out of profits that higher corporate taxes could take.
I’ve fielded some questions about the possibility that all of this spending could lead the US Dollar to weaken.  Interestingly, we’ve seen the opposite recently, as the Dollar has rebounded off of lows.  Our economic growth is being viewed positively globally, which is behind the Dollar’s rally, I believe.  Longer-term, I don’t know about the Dollar, but near term, I wouldn’t bet against it.  That Dollar strength may also be tied to interest rates, which have risen a lot over the past 12 months.  I am not expecting interest rates to go much higher, but I’ll admit that there is more upside risk to rates than downside.  That’s probably bad news about long-term bonds, so if you own bonds or bond funds, I suggest reviewing them to make sure they are short-term in maturity or duration.
On a final note, Tax Day has been moved back to May 17, so you have a few more weeks to get your returns wrapped up and to make IRA contributions if you’re eligible.  If you need any help, we’ll be glad to try to coordinate things with your CPA, if you’d like.

Past performance may not be indicative of future results. There is no assurance any of the trends mentioned will continue or forecasts will occur.  Investing involves risk including the possible loss of capital. Asset allocation and diversification do not guarantee a profit nor protect against loss.

The forgoing is not a recommendation to buy or sell any individual security or any combination of securities.

The S&P 500 is an unmanaged index of 500 widely held stocks that is generally considered representative of the U.S. stock market. Individuals cannot invest directly in any index.   Index performance does not include transaction costs or other fees, which will affect investment performance.  Individual investor results will vary.  Every investor’s situation is unique and you should consider your investment goals, risk tolerance and time horizon before making any investment. Sector investments are companies engaged in business related to a specific sector. They are subject to fierce competition and their products and services may be subject to rapid obsolescence. There are additional risks associated with investing in an individual sector, including limited diversification.  The foregoing information has been obtained from sources considered to be reliable, but we do not guarantee that it is accurate or complete, it is not a statement of all available data necessary for making an investment decision, and it does not constitute a recommendation. Any opinions are those of Scott Mitchell and not necessarily those of Raymond James.  Expressions of opinion are as of this date and are subject to change without notice.  Raymond James does not provide tax or legal services.  Please discuss these matters with the appropriate professional.